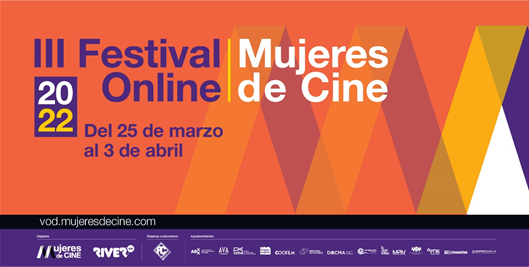 Madrid, March 16, 2022.- The Women of Film Online Festival, which will take place between March 25 and April 3, announces the Official Section of the contest with 10 outstanding films directed by women that can be seen online for 10 days on the festival website.

The vouchers can be purchased until Sunday, April 3, at a price of €6,95, with ten days to enjoy the viewing from the day the voucher is purchased.

A magnificent opportunity to enjoy from home some of the most powerful proposals of contemporary cinema signed by women.
The program brings together films directed or co-directed by women, from countries such as Colombia, Venezuela, Portugal, Italy, Sweden, Hungary, Bosnia and Herzegovina and Spain.
The titles that make up the Official Section are:

Works that offer genuine view of issues like the loneliness in the mythologized maternity, the lack of freedom, the passage from a girl to a woman, misogyny, machismo, family, love; a heterogeneous scan of recent female-authored film production, which highlights her contribution to contemporary cinema.
Ten surprising stories that travel from documentary to fiction and what have they been through renowned national and international film festivals such as Sundace, Seminci, Berlin Film Festival, Malaga Film Festival, Bogotá Film Festival, Venice Film Festival, San Sebastian Film Festival, Montreal Film Festival, Seville European Film Festival or SXSW Film Festival.
All of them also accumulate recognitions in prestigious contests such as the Goya, Feroz, Gaudí, Oscar, BAFTA, David di Donatello Awards, Independent Spirit Awards, British Independent Film Awards (BIFA) or European Film Awards.
“We can finally announce the ten titles that make up the III Women of Film Online Festival. The public will be able to enjoy singular and heterogeneous proposals in an initiative that vindicates and celebrates for another year the talent and great contribution of women filmmakers”, she points out. Ana Palacios, director of Mujeres de Cine.
This year, the Women of Film Online Festival joins the commemoration of International Women's Day (8M) by halving the price of the bonds acquired on March 8.

The third edition of the Women of Cinema Online Festival has RC Service as sponsor of the Best Director of Photography Award and with the collaboration of AEC (Spanish Association of Directors and Directors of Photography), AVA Foundation, CIMA, Cine por Mujeres, Coofilm , Directors of Photography, DOCMA, Espiralarte, La Gran Belleza, MAV (Association of Women in the Visual Arts), Women in the Music Industry (MIM), PNR (Platform for New Filmmakers), Union of Filmmakers and WOFEST. The event also includes the radio program ´Butaca y Butacón´, by LaFM, as a collaborating medium.

The Women of Film Online Festival burst into 2020 with an unprecedented goal: to be the first online contest dedicated exclusively to female-authored film production. The purpose of the contest is to value the work of women directors, as well as their contribution to contemporary cinema.

As in previous years, this third installment highlights the need to honor female talent by awarding three distinguished awards:

Our directors of photography nominated this year are:

The Official Jury of the Festival they configure it Said Benzal (film director, screenwriter and actress), John Barrero (photographer, film director and producer) and Judith Colell (film director and currently President of the Acadèmia del Cinema Català); Meanwhile he Jury for the Best Director of Photography Award It is composed of Theresa Medina (director of photography and president of the AEC Spanish Association of Directors of Photography), William Sempere (director of photography and producer) and Andrea Guzman (cultural manager and filmmaker).

On Women of Cinema
Women of Cinema is a space for vindication, reflection, meeting and visibility of women in cinema . Throughout his career, he has established himself as referral initiative within the cinematographic scene. In more than 10 years of his life, he has performed more than 500 projections in venues around the world with an audience of over 120.000 people and a multitude of activities aimed at promoting participation and reflection on the situation of women in cinema, culture and society (presentations, colloquiums, meetings, tributes -Woman Film Award-). Since 2019, she has a pioneering initiative: Mujeres de Cine VOD, the first video on demand platform dedicated entirely to films made by women.

Movie materials and artwork: Drive folder
For more information, interviews and reports, contact:
Belén López-Palop, press officer for Mujeres de Cine.
This e-mail address is being protected from spambots. You need JavaScript enabled to view it. - +34 611 408 671