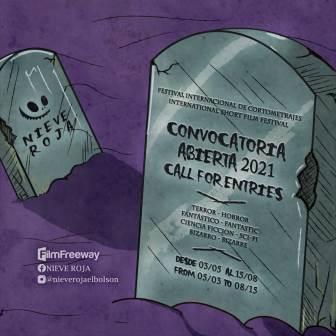 The Red Snow Festival of El Bolsón (Río Negro - Argentina) begins the path to its 3rd Edition, opening the call for short films of the horror, science fiction, fantastic and bizarre genre.

It is our pleasure to announce the first competitive edition consisting of 3 categories:

In addition, it maintains its long-awaited Show of short films out of competition. You have time until 15/8 to send us your short films (registration for Argentine shorts is free), the bases and registrations can be found at the following link: https://linktr.ee/Nieveroja or on our social networks: @NieveRojaElBolson (Instagram) and Red Snow (Facebook).
This Festival was born in 2019 with the intention of being a sample and dissemination space for the Patagonian production of short films of the horror and fantasy genre, whose production grows year by year and needs more exhibition and promotion spaces. After the alliances generated in its successful second edition and with the union with RED-FAP (Network of Patagonian Audiovisual Festivals), RAFMA (Argentine Network of Audiovisual Festivals and Samples) and FantLatam (Latin American Alliance of Fantastic Film Festivals), Snow Red This year, it grows into an International Festival, being the first and only one in Argentine Patagonia that is exclusively devoted to genre cinema.

For more information about Red Snow, follow us on our social networks.
www.facebook.com/nieverojaelbolson