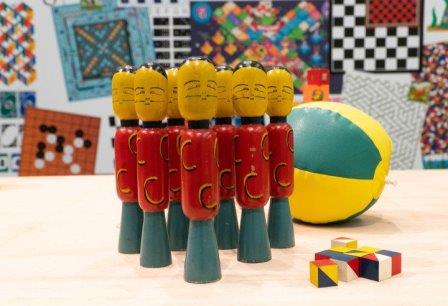 Art at Play
Proa Foundation
Av. Pedro de Mendoza 1929 and Caminito
Buenos Aires, Argentina
(+ 54-11) 4104-1000
This e-mail address is being protected from spambots. You need JavaScript enabled to view it.
Between December 2021 and March 2022

On Saturday, December 18, 2021, the Art at Play exhibition was inaugurated in the Proa rooms. A playful approach to Argentine art, curated by Rodrigo Alonso. The exhibition highlights the importance of toys, games, sports and participatory proposals in the inspiration and imagination of Argentine artists.
Integrating the work of filmmakers from different generations and aesthetic extractions, it offers an unusual look at the quantity and variety of historical and contemporary productions that highlight the value of playfulness as a tool for creation and reflection.
From the games invented by Xul Solar to current video games, passing through author toys, "retro" and nostalgic registers, sports confrontations, art to experiment, appropriations of commercial games, playful robotics and the construction of masquerades. in social networks, the works that are presented in the exhibition invite us to pay attention to a consistent, although little noticed line of national artistic production.
The exhibition begins with a work created especially by Daniel Joglar from the vast world of childhood toys. It continues with the works of almost 80 artists who, at some point in their careers, or for a long time, made games and their effects the axes of an approach to their time or context. There are authors who resort to them to question the supposed seriousness of art, others to open new aesthetic paths, others to reflect on the social place of the ludic, others to appeal to the emotional memory of the viewer.
There are some complacent looks towards them, but also other ironic or highly critical ones. The same thing happens in the section dedicated to sports, where issues such as competition, demand or success are put under the magnifying glass. Finally, the last sector of the exhibition is immersed in new technologies, electronics and social networks. Here the focus is on interactive art, which promotes participation and is linked in a special way with the devices that make up the technical ecosystem in which we live.
The selection of works includes the most varied media: painting, sculpture, installation, photography, video, objects, interactive art. The exhibition is complemented by a program of activities for the most diverse audiences that take place throughout the summer.

Malba presents the exhibition The Metamorphoses, dedicated to the photographic essay in which Madalena Schwartz (Budapest, 1921 – São Paulo, 1993) portrayed the transvestites and transformists who frequented the alternative scene in São Paulo during the first half of the 1970s, in full military dictatorship. This is Malba's first collaboration with the Moreira Salles Institute (IMS) in Brazil, at whose São Paulo headquarters the exhibition was presented between February and September 2021.
In dialogue with Schwartz's images, the exhibition also offers a brief overview of Latin American photography dedicated to trans life in those years with works by different authors and groups from Argentina, Chile, Bolivia and other countries in the region. In total, the exhibition brings together 112 photographs by Schwartz and more than 70 historical pieces such as newspapers, documents, films and images that account for the context in which the photographer made her work. The curatorship is Gonzalo Aguilar, member of the Malba Artistic Committee and professor of Brazilian and Portuguese Literature at the University of Buenos Aires, and Samuel Titan Jr., Executive Coordinator of the Moreira Salles Institute (IMS) in Brazil and professor of Literary Theory at the University of São Paulo.
As a starting point, the exhibition presents the singular trajectory of Schwartz, one of the great exponents of Brazilian photography, whose collection is under the care of the IMS. Born in 1921 in Budapest, Schwartz emigrated to Argentina at the age of twelve. In Buenos Aires, the young Hungarian got married and had two children. In 1960, about to turn forty, she moved with her family to São Paulo, where she opened a laundromat in the center of the city.
His life would change when, in the mid-1960s, one of his sons won a camera in a television contest. Schwartz was immediately interested in the artifact, she took courses at the legendary Foto Cine Club Bandeirante and, almost fifty years old, she started a new and surprising career that would transform her into a unique expressive figure.
This exhibition focuses on a specific set of images by Schwartz, partially published in the book Crisálidas (2012). In it, the photographer documents the transvestite and transformist universes of the center of São Paulo in the seventies. They are characters that she met in her daily life, on the way between the laundry and the Copan building (a huge residential skyscraper designed by architect Oscar Niemeyer), where she lived with her family and had her studio.
A lover of the theater, Schwartz began a series of portraits with personalities from that world and from television: the members of the Dzi Croquettes group, the singer Ney Matogrosso, the actress Elke Maravilha and the Argentine performer Patricio Bisso (his neighbor from Copan), among others. others. Continuing the same line, he also dedicated himself to photographing lesser-known people who made their living in hairdressing salons or nightclubs. A large part of these portraits were made in an improvised studio in his own house, in an atmosphere of exchange and complicity.
In addition to Schwartz's photos, the exhibition features copies of the avant-garde newspapers Lampião da Esquina and Chana com Chana (voices of the gay and lesbian community of the time), posters of films such as La Reina Diabla (1974) and El beso de the spider woman (1985), television clips and photos from personal files, among other items that document that universe of criticism of current conservative patterns. Also featured is a map of downtown São Paulo in the 1970s, conceived especially for the show, which includes alternative points of the city in the period.
Regarding the political scenario in which Schwartz produced his images, the curators, Gonzalo Aguilar and Samuel Titan Jr., say: "It was not just any historical moment, but the lead years of the Brazilian military dictatorship under the government of General Emílio Garrastazu Medici. Oppressive and violent years, but also paradoxically fertile: expelled from the political-party sphere, the protest made itself felt through other channels, aesthetic, behavioral, erotic. Madalena captured in the photographs of her that tremendous explosion of color and utopian energy”.
Curators: Gonzalo Aguilar and Samuel Titan Jr.
Organized in collaboration with the Moreira Salles Institute of Brazil.

Magdalene Schwartz
Budapest, 1921 – Saint Paul, 1993
In 1934, after the death of his mother, he traveled with his brother to Argentina, who was based in the country. In 1960 she, married with two children, moved to São Paulo, Brazil, where she lived until her death. She began to work with photography late, about to turn fifty. She was a member of the Foto Cine Bandeirante Club and the so-called Paulista School, along with other photographers such as Marcel Giró, José Yalenti and Gaspar Gasparian. Schwartz began a series of portraits of leading figures from the world of theater and television, some well known as the singer Ney Matogrosso, and others who made a living in the nightclubs of the city center, where she lived. She also portrayed Brazilian plastic artists, musicians and intellectuals, such as Sérgio Buarque de Holanda and his son Chico Buarque, Clarice Lispector, Jorge Amado and Carlos Drummond de Andrade.

In this section Exhibitions you will find reviews, critiques and analysis of the best contemporary art exhibitions worldwide.

Recommendations of Art Exhibitions in Rio de Janeiro, 2021 At CCBB RJ you can visit, ...

Rita Simoni: Urban Alchemy Holding an exhibition in a bar is a challenge. A bar that ...