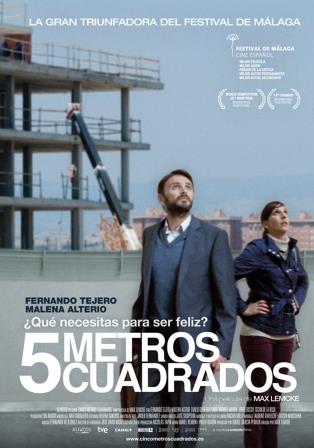 The behind the scenes of real estate scams in democracy have, with "Cinco metrosquare" (2011) by Spanish director Max Lemcke, a tragicomic resolution, through the Stations of the Cross of a young couple wanting to get married and buy their first home. This, within the line of productions such as "El pisito" (1959) by Marco Ferreri, where a Francoist couple wants to make the dream of owning their own home come true, during the housing crisis prior to the economic boom of the sixties.
The film opens with the panoramic views of Benidorm of skyscrapers and housing developments, which emerged before the bursting of the real estate bubble during the financial crisis of 2007 that ended with a paradisiacal place on the Valencian Costa Blanca; and focuses on the conversation between Montañés, a real estate speculator, and Arganda, the corrupt mayor of the town where, with the complicity of officials from the agency in charge of the environment, they want to build the “Señorío del Mar” complex by requalifying an area protected from which, in addition, no sea can be seen: "—Give me the license / —And if they look at it in Environment? / - We are all in Environment, man."