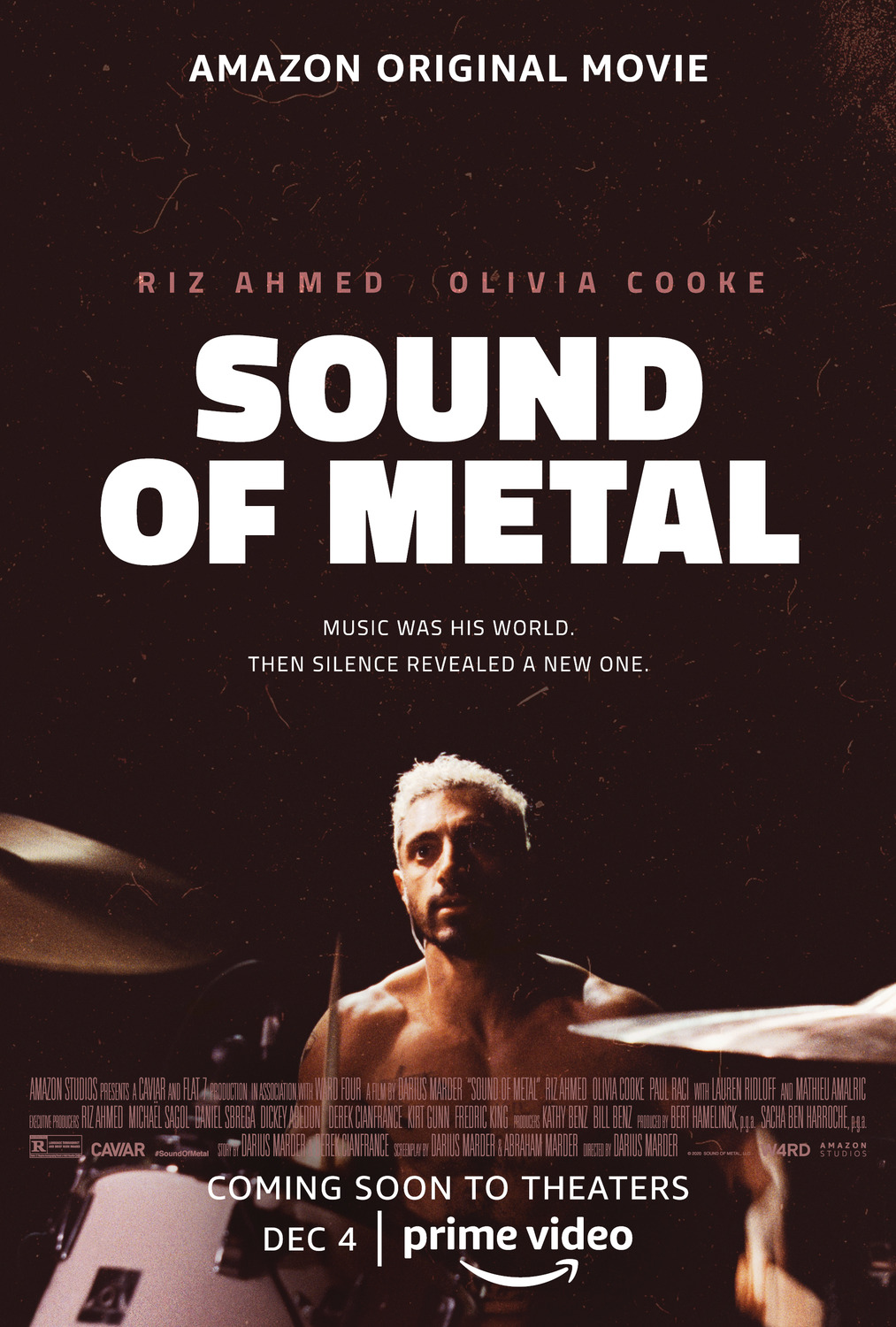 The Sound of Metal is a 2019 American drama film directed and co-written by Darius Marder and starring Riz Ahmed (Ruben Stone), Olivia Cooke (Lou), Paul Raci (Joe), Lauren Ridloff ( Diane), Mathieu Amalric (Richard Berger) and Chealsea Lee (Jenn). It tells the story of a heavy metal drummer who progressively loses his hearing.
The film premiered at the Toronto International Film Festival on September 6, 2019. It received six nominations for the Oscars 2021 and managed to win two: for best editing and best sound.

Synopsis:
Ruben Stone (Riz Ahmed) is a drummer for the heavy metal duo Blackgammon, along with his girlfriend and singer, Lou (Olivia Cooke). They live in an RV while performing concerts throughout the United States.
Rubén discovers that he is losing his hearing and consults with a doctor for a diagnosis. The doctor discovers that Rubén can only distinguish between 20 and 30 percent of the words he hears and his hearing will deteriorate rapidly; Also, although cochlear implants may benefit you, their high cost is not covered by insurance. The doctor suggests that Rubén eliminate all exposure to loud noise and then undergo further testing, but Rubén ignores it. Also, the drummer is a recovering drug addict. Lou learns of Ruben's condition and wants to stop acting for his safety, but he wants to continue. Lou finds a rural shelter for recovering deaf addicts that accepts Ruben, run by a man named Joe (Paul Raci), a recovering alcoholic who lost his hearing in the Vietnam War.
Ruben begins to meet the other members of the shelter while attending meetings and settling into his new life. In class Diane begins to learn sign language. Joe asks Ruben to write endlessly, in an effort to make him comfortable with silence, and confides that he himself will do the same simultaneously. Ruben begins to connect with the children and the rest of the community. He gives the children and Diane basic drumming lessons.
So far, Rubén's stay has been sponsored by a church. Joe offers her a more permanent way to stay, as a community employee, and tells her to think about it. But he doesn't want to stay, so he gets his friend Jenn (Chelsea Lee) to sell her drums and other music equipment, then sells his trailer and uses the money for cochlear implant surgery. Ruben asks Joe to loan him money to buy back his caravan, while he waits for the implant to be activated. Joe refuses, commenting that Ruben looks and sounds like an addict. Heartbroken, Joe asks Ruben to leave the community, as it is based on the belief that deafness is not a disability, it is not something to be repaired.
The implants allow Ruben to hear, but the sound from them is severely distorted and this interrupts his attempts to regain his old way of life. Ruben flies to meet Lou at the home of his wealthy father, Richard (Mathieu Amalric), in Paris, and Ruben there discovers that his implants do not allow him to listen to music as he used to. The next morning, Ruben takes his things and leaves while Lou is still sleeping. Annoyed once again by the distortion, he sits on a bench and removes the processors from his implants, feeling comfortable with the silence.

The director and his sources:
Director Darius Marder grew up in Conway, Massachusetts with his parents and four siblings. His parents, Lauri and Efrem Marder, both New York artists, lived by the teachings of the Russian philosopher and mystic George Gurdjieff. George Gurdjieff was born at the end of the XNUMXth century in the Armenia of the then Russian Empire, his main work was to make known and transmit the teachings of the fourth way in the western world. A mysterious and charismatic personality, with a keen critical sense, and a high traditional culture, captured the attention of many, guiding them towards a possible spiritual and humanitarian evolution.
Darius's family lived in Conway with about 35 Gurdjieff followers, which Marder has described as a "beautiful experience." The doctrine of the fourth way originates from various traditions (Buddhism, Sufism, Hinduism, Eastern Orthodox Christianity), theosophy and Russian Freemasonry of the XNUMXth century. His philosophy ensures that there are three paths: the path of the fakir, that of the monk, and that of the Yogi. Beyond these three paths, there is a fourth or fourth path, a metaphysical, cosmological and philosophical doctrine, idealistically oriented.
The fourth way is based on the belief that the human being needs a procedure or system to awaken (through self-knowledge, conscious attention to the environment, and especially "self-remembering"). Within this doctrine three other paths are recognized, but they are not practical within the current way of life. As the schools of the fourth way indicate today, there is a type of way for each type of person and the meaning is to find the forgotten part of themselves; In short, awakening from the dream, from the so-called waking consciousness in which one is immersed, which is nothing more than another form of sleep.
The fourth way requires the person to work on the intellect, the emotions, and the physical body. In addition to the Gurdjieff doctrines, Darius drew from other sources, for example, from the knowledge of his great-grandfather, who grew up in an Orthodox Jewish community in Austria and above all, Darius was particularly close to his paternal grandmother, Dorothy Marder, who after taking an antibiotic for a bout of pancreatitis, she was profoundly deaf. His sudden deafness had a significant impact on Darius. From all these sources the director took ideas for his film.