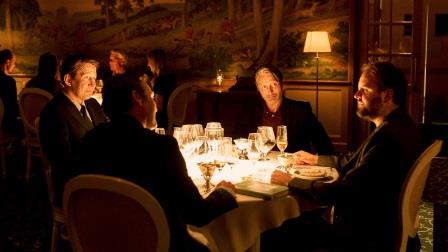 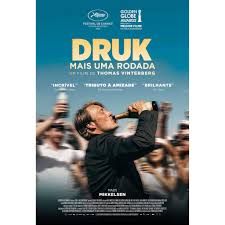 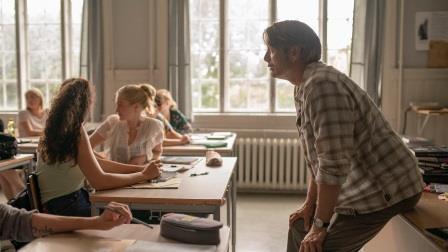 “Now I just miss my first longing. What is youth? A dream. What is love? The content of the dream ”Diapsalmata " by Søren Kierkegaard when we have the information.

Another Round (Danish, Druk) is a 2020 Danish drama film directed by Thomas Vinterberg, from a script by Vinterberg and Tobias Lindholm. It stars Mads Mikkelsen, Thomas Bo Larsen, Magnus Millang, and Lars Ranthe.
It had its world premiere at the Toronto International Film Festival on September 12, 2020. It was released in Denmark on September 24, 2020 by Nordisk Film, and was shown at the Adelaide Film Festival in October 2020. It won an Oscar that same year, as best international film, at the 93rd Academy Awards in Hollywood.

Synopsis:
Professors Martin (history), Tommy (physical education), Peter (psychology) and Nikolaj (music) are colleagues and friends at a Copenhagen school. All four struggle with unmotivated students and feel that their lives have become dull and stale. At a dinner to celebrate Nikolaj's 40th birthday, the group begins to discuss a theory by psychologist Finn Skårderud, who has assumed that every human being should maintain a blood alcohol content of 0.05 in order to become more creative and relaxed.
As the group dismisses the theory, Martin, who is depressed due to problems in his marriage, takes inspiration and starts drinking again. The rest of the group eventually decide to join him, intending to test Skårderud's theory. They agree on a set of rules: their BAC should never be below 0.05 and they shouldn't drink after 8pm.
Even finding that their lives have improved, the group decides to try binge drinking to see how their bodies and minds respond. The group has a fun night, but after coming home drunk, both Martin and Nikolaj are confronted by their families.
Martin's family expresses concern that he is descending into alcoholism, revealing that he has been visibly drunk for weeks. After a heated argument during which Martin's wife admits to her infidelity, Martin drives her out of the house. The group abandons the experiment.

Inspiration:
The film was based on a play that Vinterberg had written while working in Vienna. Additional inspiration came from Vinterberg's own daughter Ida, who had told stories about the drinking culture of Danish youth. Ida had originally pressured Vinterberg to adapt the work to the cinema, she would also be the one who would play Martin's daughter (Mads Mikkelsen). The story was originally "A celebration of alcohol based on the thesis that world history would have been different with alcohol." However, four days after filming, Ida died in a car accident. After the tragedy, the script was reworked to become more alive, stating that “It shouldn't just be about drinking. It's about waking up to life, ”Vinterberg said.

Sebastian: The conception of anxiety was? Well, Kierkegaard's concept of anxiety illustrates how a human being deals with the notion of failure.
Peter: And more importantly?
Sebastian: With having failed, you must accept yourself as fallible to love others and life.
Peter: Sebastian, can you give us an example? Sebastian: Yes, I myself have failed
(Dialogue between Peter and his student Sebastian in "Druk")

Søren Aabye Kierkegaard was born in Copenhagen on May 5, 1813 and died on November 11, 1855. He was a Danish philosopher and theologian, considered the father of existentialism.
His philosophy focuses on the condition of human existence, on the individual and subjectivity, on freedom and responsibility, on despair and anguish, themes that Martin Heidegger, Jean-Paul Sartre and other philosophers of the XNUMXth century would take up.
Much of his work deals with religious issues: the nature of the Christian faith, the institution of the Church, Christian ethics, the emotions and feelings that individuals experience when faced with the choices that life poses.
Kierkegaard made several keen observations about the nature of the generation of his day and their dispassionate attitude to life. He wrote that "the current generation is essentially rational, devoid of passions ... The trend today is in the direction of the mathematical equation" (5). Kierkegaard attacked the conformity and cultural assimilation of individuals in an undifferentiated audience, the mass. In the film "Another Round", the main criticism is directed at the rigid education given in schools, in which students are not encouraged to be creative, to think for themselves and to take an interest in multiple ways in the topics covered. They are educated to be logical and rational and to be part of the crowd, not to be individuals with feelings, desires and passions. They are not taught to doubt.
As part of his analysis of the public, Kierkegaard pointed to the decline of the Christian church, especially the Danish People's Church. He criticized attempts to reach God through objective reasoning. On the contrary, he believed that doubt is an essential element of faith.
In "The Mortal Illness" (1849), Kierkegaard proposes self-analysis as a means of understanding the problem of "despair", which according to him does not come from depression, but from the alienation of the self.
The self that failed in its goal has become intolerable; the person would have wanted to become a different self, and at such a moment is trapped in a failed self. Such denial of self is painful, for despair is overwhelming when a man shuns himself: when he is not himself.
Kierkegaard believed that the despair of the individual disappears when he stops denying who he really is and tries to discover and accept his true nature.
“More and more man is invited to escape from himself and immerse himself in the mass, to live according to generality, Kierkegaard's thought is for us a voice crying out for a return to a more authentic existence, where man is capable of confront oneself in a mature and conscious way. ”(6)