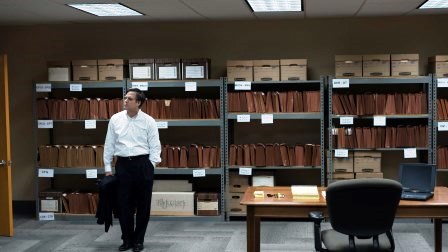 Synopsis
Robert Bilott is an attorney specializing in the defense of the chemical industries. Questioned by a countryman, his grandmother's neighbor, he discovers that the idyllic countryside of his childhood is poisoned by a factory belonging to the powerful Du Pont chemical group, the first employer in the region. In order to uncover the truth about the deadly pollution from the factory's toxic waste, Bilott risks his career, his family, and even his own life. 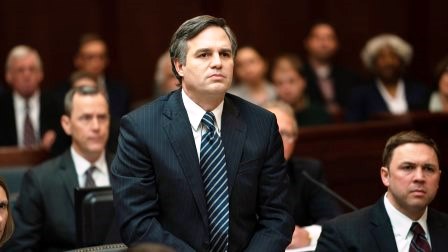 Aanalysis
It is thanks to the article that journalist Nathaniel Rich published in the New York Times Magazine on January 6, 2016, that director Todd Haynes got the idea to shoot this movie. Said article denounces DuPont's serious transgression of current environmental protection regulations, managed by the Environmental Protection Agency, a government office created in 1970. Three years after Rich's article was published, Robert Billot published his book “Exposure . Poisoned Water Corporate Greed and One Lawyer's Twenty-year battle against DuPont ”(Ed.Simon & Schuster, New York, 2019), whose research also helped Todd Haynes to make his film.
"Dark Waters" is the first denunciation film made by Todd Haynes. The cinema of denunciation is devoted, above all, to anonymous people, to the trajectory and the dangers that these individuals face when they struggle to make the truth known. The character of Rob Bilott is the person who embodies this anonymous hero, lawyer of the Taft Stettinius & Hollister cabinet. Until then, this cabinet had been hired by the petrochemical companies to advocate for them. The funny thing is that Bilott began to investigate and little by little he discovered that his client DuPont was lying about his activities and, literally, he decided to cross the road opposite, with all the risks that this implied. 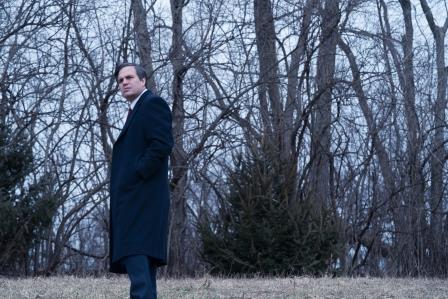 Rob Bilott is a lonely character at the beginning of the story and, as is usually the case with the genre of denunciation, the events that unfold only reinforce that isolation. But not only Rob Bilott is left alone, but also the main affected and whistleblower, Wilbur Tennant. Their lands are adjacent to the Dry Run landfill, where the Washinton Works factory, managed by DuPont, dumped its toxic waste. According to Nathaniel Rich's article, the company had accumulated 7100 tons of PFOA in Dry Run between 1951 and 1990. The substance infiltrated the ground, contaminating the land and water, elements of vital importance for both livestock farming and for human health.
The team chose natural sets from Cincinnati, Ohio, to set up Rob's law firm, and shot Wilbur Tennant's contaminated fields in Parkersburg, West Virginia. That is, they chose spaces very close to those where the events occurred. More precisely, a farm in Colerain Township, close to Cincinnati, replaced Tennant's, while the neighboring small town of Hamilton has been used as Parkersburg's main artery, with its houses and churches. For its part, a Hamilton County estate, arranged to look like it was in the late 90s, served as the Bilott home.
This geographical and temporal specificity was reinforced by visual language: cinematographer Edward Lachman, set designer Hanna Beachler, and costume designer Christopher Paterson resorted to an almost documentary approach to create a unity between the sites of filming, very contrasted, and thus underline their interdependence.
Hanna Beachler found the Taft Stettinius & Hollister office, located in the heart of the Cincinnati, Ohio business district, particularly charming. Various cabinet spaces have been used for the sets, such as Tom Terp's office, conference room, reception, break room, and winding corridors. 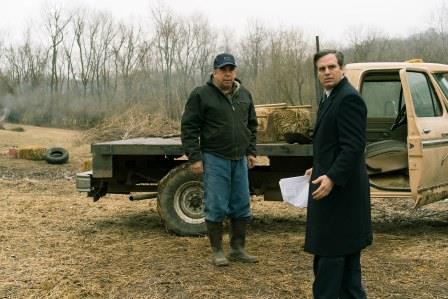 Christopher Patterson remarked that Wilbur Tennan's workwear contrasts strikingly with the office suits of the law office and with this cold, dark and uncluttered space. Instead, Parkersburg is a much richer universe visually. People wear plaid clothes, jeans, casual work clothes. Thus, from the point of view of costumes, photography and staging, these two universes are visually distinguished, while complementing each other.
Being shot in winter, the film has little natural light. It looks very dark. The natural elements - water, air and earth - take on a grayish tint, marked by the toxic substance PFOA, with which DuPont manufactured the Teflon coating of kitchen implements. This element, although invisible, permeates and contaminates the entire landscape, leaving it bloodless. For their part, the skyscrapers of Cincinnati enhance the great economic power of North American cities.
What Todd Haynes remarks in an interview about man-made ecological disasters and their long-term consequences is especially interesting. “In Dark Waters, what at the beginning is presented as a regional and national contamination of air and water, is transformed into a worldwide contamination of the blood system, thus marking our interdependence as inhabitants of the planet, but as victims of capitalist systems and ideological. But in this dreadful man-made catastrophe, we are ineluctably united by a common fate and it is our awareness of what has happened, which unites us one to another, in this which is, at the same time, an endless struggle for justice and for our own survival. "
The search for a justice that punishes and repairs aberrant crimes, committed against nature and the human species, based on obtaining profits at any price, is one of the pillars on which the action is sustained and, in addition, a burning present. Rob Billot's findings haunt Nazi methods of experimentation on people.
Nadan Feldman, a doctoral student at the Hebrew University of Jerusalem, discovered during his investigations that the German chemical laboratory IG Farben, manufacturer of the lethal gas used by the Nazis for the genocide of mostly Jewish prisoners, received part of his experience thanks to technology exchange agreements with the American DuPont laboratory.
The Delaware-based chemical laboratory used its own employees as guinea pigs to test the material for toxicity, even knowing its danger, and they continued to market it through the Teflon coating. They dumped huge amounts of waste on a piece of land in West Virginia, which they bought especially for that purpose.
Lawyer Billot presents the case in civil and not criminal justice, however, what he discovers is criminal. After 20 years of research, he was able to determine, without a doubt, that the substance PFOA causes deformities in newborns and cancers of all kinds in adults
The problem of environmental pollution is crucial in our time. It is essential to find a way to organize a sustainable world economy, which can be consolidated within the natural cycle, using the recycling of materials as a foundation. A clean economy that prioritizes public health over profit.
Tim Robbins - an actor who plays Rob's boss, Tom Terp - says in reference to the lawyer, the film's hero: "I am a great optimist because I believe in the power of a single individual", and adds, "a single person is capable of to stop a crowd. A single voice that expresses reason can shake public opinion. "
For her part, Anne Hathaway - an actress who plays Sarah Billot - adds in the same vein: “One of the merits of the film is to show that this extraordinary being, even in a corrupt universe, has been supported (by his boss). Together they have been able to lift mountains (...) It is up to us to make decisions. We must mobilize for the planet, for ourselves and for others. "

Exhibit 1: Who is Todd Haynes, the director of “Dark Waters

Todd Haynes is a freelance American filmmaker and screenwriter. Born in Los Angeles, he was interested in art from an early age. After his studies in arts and semiotics at Brown University, he settled in New York where he made the short film "Supertar: The Karen Carpenter Story" (1987) in which he has used Barbie dolls to tell the life and death of singer Karen Carpenter.
He made his film debut with "Poison" in 1991. This feature won the Grand Jury Prize at the Sundance Film Festival and has given birth to what has come to be known as New Queer Cinema.
His film “Velvet Goldmine”, an ode to the glam-rock era of the early 1970s, has been presented in official selection at the 1998 Cannes Film Festival where it has won the Special Jury Prize.
In 2015 he filmed “Carol”, an adaptation of the homonymous novel by Patricia Highsmith. Portrayed by Cate Blanchett and Rooney Mara, the film has won numerous accolades, including six nominations for the Oscars, five for the Golden Globes and nine for the BAFTAs. In addition, it was voted best LGBT film of all time by the British Film Institute.
Haynes shot in 2017 "The Museum of Wonders" ("Wonderstruck"), based on a book by Brian Selznick, which has earned him several distinctions and the Critics Association Award.

The Earth Charter is an international declaration of principles and progressive proposals. This declaration affirms that environmental protection, human rights, equal development and peace are interdependent and indivisible.
For the project "The Earth Charter" a commission was formed in 1997, made up of people and organizations from different cultures and sectors who participated in its drafting. Promoted within the United Nations and its organizations, it has been translated into more than 30 languages ​​since its launch in 2000.
The declaration contains a global approach to the challenges of the planet, as well as proposals for changes of shared objectives that can help to solve them. However, the United States of America has systematically opposed international treaties on the environment, considering them contrary to the interests of its industry.
The final version of the Charter was approved by a commission made up of 23 personalities from various continents and chaired by the Nobel Peace Prize winner, Mikhaïl Gorbachev, at a meeting held at Unesco headquarters in Paris in March 2000. The launch The official Earth Charter took place at the Peace Palace in The Hague on June 29, 2000, in a ceremony presided over by Queen Beatrix of the Netherlands.
Since its inception, and especially since 2007, the Earth Charter has continued to grow in formal endorsement and legitimacy. More than 5 thousand organizations have given their explicit support along with a multitude of direct personal adhesions, configuring a global support of millions of people.
The text is structured around 4 basic or angular principles, displayed in 16 general principles, developed and complemented in turn by 61 detailed or supporting principles. All of them are preceded by a Preamble, and end with a concluding text.
The 16 general principles, divided into 4 basic principles each, are as follows:

The Letter ends with these words: may ours be a time to be remembered, for the awakening of a new reverence for life; for the firm resolve to achieve sustainability; for the acceleration in the fight for justice and peace; and for the joyous celebration of life.

The collective ideal proposed by the Earth Charter is not only that of sustainable development focused on the environment and its economic and social factors, but that of a sustainable “style or way of life”. It promotes the care of all forms of life and collective responsibility, in solidarity, towards the common destiny of the earth and humanity. Because human development is primarily about "being more, not having more."
Sustainable development allows the Earth, while preserving its beauty, its integrity and its abundant but limited resources, to satisfy the current needs of all humanity unconditionally. But it does so in such a way that the Earth can reproduce, regenerate and continue its evolution, as it has done for four and a half billion years, thus also meeting the needs of future generations.