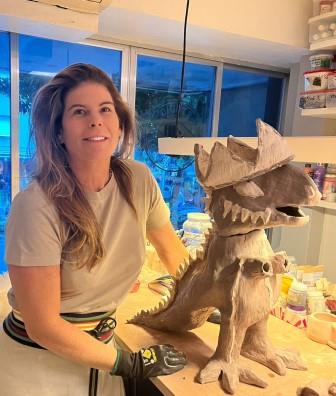 Interview with Vik Inaudi
Director of the MUD Pottery School

Victoria Inaudi is an Italian-Argentine artist born in Córdoba. During her youth, she lived between Córdoba, Ushuaia and Buenos Aires, until she moved to Europe at the age of seventeen.
He settled in Rome, where his first encounter with sculpture took place, attending various workshops and schools throughout the Italian peninsula.
Rio de Janeiro ended up being the final destination of his long journey, where he continues to live and where he opened the MUD School of Ceramics, which he directs with great passion and dedication to this day.
Its totems, up to 2,10 meters high, made with fitted ceramic pieces, are symbols of a nature that tends to infinity and the universe, and that unites the earth and the sky. Its cocoa trees refer to what the Mayans considered the fruit of the gods.
Its chandeliers are elements full of meaning. It is one of the main Judaic symbols and represents the eternal light of God and of his holy book, the Torah. But especially it alludes to the Menorah, the seven-branched candlestick. The number seven, considered by Judaism as the perfect number, also corresponds to the seven planets and the seven heavens.
The ceramics of intertwined hands refer to the brotherhood between races and nations, and invite us to reflect on the need to unite, especially after the havoc caused on a global scale by the Covid-19 pandemic.

Vik Inaudi invited us to her workshop and we talked with her about her beginnings, the creation of her atelier, her assistants and students, and the benefits that the practice of ceramics has on physical and mental health.

1- How, when and where did you start your profession as a potter?

Since I was little I had a special attraction for art. As a child I attended some art schools and attended workshops where they taught me to paint in various techniques. Pottery was a bit later, more or less in its teens. In Argentina I attended my first ceramic atelier and I was fascinated, I loved it. When I was 13 or 14 years old, super special things came to me, even when I was very young.

Then I moved to Italy. In Italy this interaction with art was much facilitated, I attended many workshops, I took several courses. I had my first child there, so I couldn't devote myself to ceramics 100%.

However, I began to internalize myself by taking courses, understanding a little about what the world of ceramics was about until I arrived in Rio de Janeiro in 2011 and, a few years after arriving, I opened an atelier in Gávea, where I began to work on my own pieces, but at that time I did not have an oven so I supported myself in several workshops in Rio, until I bought my first oven, about 8 years ago (2014).

Then I began to experiment much more, to grow in the world of ceramics by leaps and bounds. By having my own kiln, I was able to experiment more without relying on firing pottery in kilns in other workshops.

2- What artists inspire you to create your works?

There is no one who inspires me, many times I start the work with an idea and the result ends up being completely different, it drifts in other ways, I am not going behind perfection or a model artist, I like it to be noticed, that the soul of ceramics is seen, the soul of working something by hand out of the moulds. In principle, my work is very instinctive, it comes from the soul, it is also very therapeutic for me. I walk alone, I am totally self-taught.

3- When did your first exhibitions and the sale of works begin?
During the years I lived in Italy, the pieces I made were exhibited in the same workshops, where open days were organized. There the potters exhibited their works and had the possibility of having an interaction with the public.
Over time, this interest of mine began to become monetary, which until now was just a hobby. My first exhibitions were in Italy. Here, in Rio de Janeiro, my first exhibition took place at the Casa de Cultura Laura Alvim, in Ipanema. This exhibition was shared with two other River Plate artists, one from Uruguay and the other from Argentina.
I also made, at the request of some restaurants, some designer glasses for drinks, for fine cocktails. I also made some bowls and plates, always designer, all made by hand.

I believe that ceramics is making a comeback, since it has not been given particular attention in recent decades. On the other hand, at this time, if you go to any art gallery, you will find some ceramic artist in the exhibitions. So, ceramics is taking back a bit of its space.

4- How and when was your idea of ​​forming a ceramics school born?
The MUD thing was extremely spontaneous, I had never given ceramics classes, but in my atelier here in Leblon, during the pandemic, people came to browse. They said: “How nice, a ceramic atelier! It was always my dream to make ceramics, but well, I never did. Do you teach classes?
And then I realized that there were many interested people and I decided to open MUD. At first I started to teach and I loved having the experience of relating to education, it had never happened to me. The first atelier began to fill up and so I decided to come to this MUD in Leblon, which is bigger, and thus expand the possibilities by hiring potters.
At MUD we began to open a schedule for a group of children, it filled up and thus we opened more schedules, thus we also began to open adult groups. We currently have two ovens and groups that attend the workshop from Monday to Saturday, both children and adults.

5- Are there among your students, children and adults with different physical and/or psychological problems, whose artistic expression is helping them to overcome their difficulties?

Today we have more than a hundred students and we have several teachers and assistants. The teachers fell into MUD themselves wanting to collaborate and they are all amazing professionals. There are architects, psychologists who work with child psychology, with art therapy. There are plastic artists, dentists, who also have that spectacular manual capacity.

We have assistants and teachers with experience in other schools, they are educational psychologists. They have a lot of practice working with children and realizing the difficulties they may have.

We have received children with different spectrums of autism, other children with concentration difficulties. After a while they have an incredible improvement here, working with ceramics.
Among the adult students we have a man with Parkinson's and we have seen how well manual work has done to his subtle motor movements. Ceramics help a lot with that.
For a muscular question, for people of a certain age, kneading the clay is very good for the whole part of the arms and the hand. In short, ceramics entails many positive things in relation to health.
6- What other benefits can work in ceramics bring?
Nowadays people are needing to slow down. We are full of information, involved with the cell phone, receiving information of all kinds on all kinds of screens. That speeds us up and does us no good.
Ceramics, being part of an atelier, where you can have interaction with other people with the same interests as you, and whether it be creating, making art, leads you to slow down a bit and be with yourself.
This is for both children and adults. That is one of the most important points of why MUD, why make ceramics, why be part of an atelier and create a fraternization within a ceramic workshop where there are colors, there is good vibes, music is heard, you get involved to work, to create your own pieces and, when finished, you take them home or give them to your friends and family. All of this gives you immense gratification.