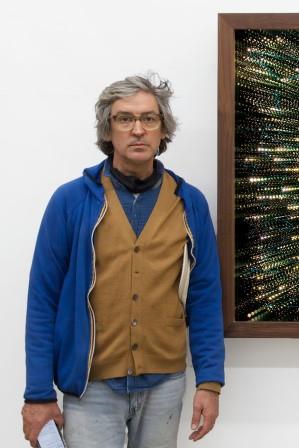 Iván Navarro is a conceptual sculptor who creates illusory spaces with colored neons and mirrors. He was born in Santiago de Chile in 1972, and currently works in New York, United States.
His work has been part of numerous exhibitions in important museums and art centers such as: the Guggenheim Museum in New York, the Egeran Gallery in Istanbul, the Daniel Templon Gallery in Paris, the Farol Santander exhibition center, São Paulo; the Museum of Contemporary Art of Niterói, Rio de Janeiro; the Museum of Contemporary Art of Buenos Aires; the National Museum of Fine Arts in Santiago de Chile, among many others.

The Luciana Brito Gallery of São Paulo presented, at ArtRio 2021, two works by Iván Navarro, made in 2020, “Ipanema (green)” and “Chimney (orange)”. The quality of these works is worthy of note, and that is why we have conducted this interview with their creator.

How are your childhood memories linked to your choice to be an artist?
My house and my family were always surrounded by people doing some artistic and especially manual work, from carpentry, fabrics, prints, music, drawings and painting… I was unconsciously trained as an artist, but I never realized it until later. Possibly not until my daughter Sayén was born in 2007, when I realized how much what you do at home affects the youngest who are watching you. And if they are part of these processes, later Art becomes part of their lives naturally. I finally became an artist because it is the way to observe what was being built in my mind and body to face life. For example, my daughter draws as a form of meditation ... notoriously it is a spiritual way of life that she has developed.

How did the idea of ​​using neons and mirrors in your works come about?
At the beginning, when I started working as an artist, I was interested in the relationship between art and architectural space. For this reason I was interested in lighting. He even used the same lighting system that already existed in a space, but he inverted or transformed it in such a way that these lighting objects became more than just utilitarian objects of the place. Later I discovered the infinite effect produced by a sandwich of two mirrors with a light in between. This effect made a lot of sense to me because it extended the idea of ​​working with architectural spaces. With the effect of infinity I began to make illusionistic interventions on the walls of the rooms. Thus the actual architectural space became larger and I began to experiment with ideas of visual and psychological perception with the viewers.

What messages do your works "Ipanema (green)" and "Fireplace" (orange) "convey?
Inspired by the urban and natural landscape of Ipanema Beach in Rio de Janeiro, these works are part of a series of wooden boxes with neon light. The pattern of the drawing, made by neon, follows the shape of the Portuguese stone walkway along Ipanema Beach, designed by Roberto Burle Marx in the 70s. The colors of the boxes correspond to the rainbow - red, orange, yellow, green, blue, indigo and purple. Which defines and is in itself, the abstraction of the spectrum of colors of the exterior and natural landscape illuminated by the sun. The works seek to connect the outer (urban) space to another psychological (natural) that the viewer experiences when facing the infinite and fictitious space, created by each light box.

What new works are you currently working on?
I am working with paint and LED light on mirrors that I am carving. He had never painted a series before, it has been an apprenticeship and a discovery to reveal his own technique to develop works. I decided to risk something that I had never done or had never noticed before. That has been the most interesting thing, losing the fear of Art ... it is good to disrespect technique.

Do you have exhibitions scheduled?
For this year (2021), I will do a solo exhibition in Santiago de Chile, at Galería Madre, and a public project in Miami, organized by the Vitrina Lab Foundation. For next year I am organizing several projects, especially in Europe.