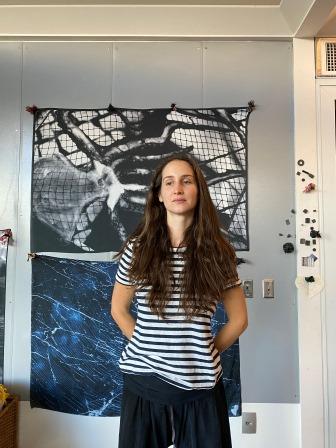 Isidora Gajic is a visual artist, born in 1988 in Belgrade, Serbia. Isidora lived in Hungary, Switzerland and the Netherlands before moving to Araras, a mountainous region of Rio de Janeiro, where she lives to this day.
He worked at World Press Photo, as creative production manager and archivist for photographers Paul Blanka and Miguel Rio Branco.
Isidora exhibited in Brazil, in places like the SESC in Petrópolis, Rio de Janeiro. Also in Holland, Serbia and Latvia. Some of the awards he has received include the "Dutch Talent 2012". Likewise, he participated in residencies such as the ISSP, in Latvia, in 2012 and Miguel Rio Branco, in Brazil (2014).
He participated with his photographic collage "Havana Taxi, blues" (2016) at the stand of the gallery Silvia Cintra + Box 4, during the ArtRio 2021 fair.
Why did you choose Havana for your 2016 photo series?

Havana always caught my attention for its music and history. I thought it was the last chance to visit before the big changes. And, in fact, it was really, so much so that a month after I was there, Fidel Castro died.

What is the relationship between "vintage" taxis in Havana and your idea of ​​time?

The idea of ​​time with taxis was specifically the case with vintage cars: Chevrolet, Ford, Cadillac, Dodge, Buick, and Chrysler. But not only that, the dignity of the people also enchanted me. I found a strong people, ready for a global change and openness. So, 2016 was a year of great changes in Havana. Using portraits of people in vintage cars as a metaphor. The passing cars driven through time.

Is there a link between the English meaning of "blues" in the title and the photos of blue taxis?

Yes, it can actually be several things. The music, the blues, the emotions, but also the color of the cars.

What topic are you currently working on?

I am now working on a series of silk prints. From various images that I made of nature, about poetic relationships between feminine and nature.
Photos of spiders, cobwebs, waters, pregnant women, octopuses, jellyfish. Then I print on silk in larger formats.
It's a job I've been doing for years, but silk printing started during the pandemic.

Do you already have exhibitions scheduled?
All exposures were postponed due to the pandemic. My last exhibition was at the Silvia Cintra Gallery in 2020, just before the pandemic. And I participated in 2021 in a group exhibition in Belgrade, Serbia, at the Pavillon des arts Cvijeta Zuzoric.