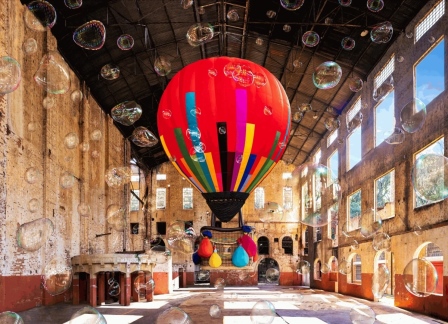 Flávia Junqueira works mainly with photography. The visual universe of childhood and the construction of an imaginary about this first stage of life permeate the artist's work from the beginning of its production.
Indeed, in the photograph presented at ArtRio 2021, Ingenio de Piracicaba # 1, we see in the center of the scene a hot air balloon that draws attention due to the space it occupies and the variety of saturated colors it displays, frequently used in stories, cartoons, children's movies and even toys.
In addition, the absence of human figures and the fact that children's objects remain in the middle of a space declared national heritage is striking. As with his 2019 play, Theatro João Caetano nº1, where balloons of various colors float in the interior space of the oldest theater in Rio de Janeiro.
Thus, Flavia Junqueira's photography critically alludes to our current situation, a time when visual pleasure and the possession of luxurious, bright, colorful objects coexist on a ruined, lonely background, devoid of humanity. At the same time, a virtual image that comes to us through movies and children's stories, full of color and naivety, in the face of an imperfect and meaningless reality.
Junqueira's works are part of the collection of important museums and art centers such as MAM-SP, MIS-SP, MABFAAP, Museo de Itamaraty, RedBull Station, World Bank and Instituto Figueiredo Ferraz. At ArtRio 2021, the artist was represented by the Zipper Gallery of São Paulo.
Here is our interview with the Brazilian photographer.

How was your first contact with photography?
I graduated from FAAP (Armando Alvares Penteado Foundation). I did a degree in Plastic Arts and the first contact was in the Faculty itself. Of course, I already moved with the photographic camera in a very common way, like any child, with those analog machines, but nothing without an appropriation sense, even with a medium, such as a support for my artistic work.
So I had this direct relationship when I joined the University, I experimented with various media and one of them was photography. I worked with theatrical set design during university and used the camera a lot to record sets and small models. He built small situations, with miniatures and objects, and then he photographed them.
At the end of the Faculty, in 2008, in my TGI, which was my Interdisciplinary Graduation work, I presented a series called "In the Company of Objects" in which I put myself agglomerated with all the objects in my house and made self-portraits.
So my first contact with photography, in fact, was through these self-portraits.

Why did you choose the children's universe as the main theme of your work?
The theme of the children's universe was not a choice, but it was a process. Since childhood I have managed to understand something very magical and theatrical in childhood and I have always had a great affinity with that period that is in the memory of adults.
Little by little, in adolescence, in my youth and more mature, I realized that this childhood universe had not left me at any time. It was when I began to understand that these elements had a more theatrical, more appeasing, less rational slant, less linked to the idea of ​​Progress, an idea that was very much raised by modern architecture.
When I transform the spaces through appropriations of playful elements such as these Globes, the carousels, the Soap bubbles, I am wanting to bring a bit of the temporality of Childhood, which is a present: it has neither the nostalgia for the past nor the anxiety of the future, the time of now, the time of the child.
I also have an affinity with what has to do with collecting and cataloging objects. To take the functionality of the object and bring it to the field of the collection of something that does not have a specific objective. The collection of any object involves people taking the object out of its original function and beginning to accumulate them.
In a second moment, I am dealing with heritage architectures made to last and, at the same time, I am placing elements that end very quickly, so that that very fast moment of being a child is brought to the adult, the viewer who is watching the work. So that he also becomes a child.
The children's universe is a process that has no beginning or end, but it happens as an artistic process, as an intention for the understanding of the viewer and as a proposition of a thought that goes against progress, against the idea of ​​rationality placed there by modernity.

Do you consider that your photographs have an apparent meaning and a hidden meaning?
I consider that photographs have an apparent meaning and a hidden meaning. As in many artistic works, mainly in contemporary art. Above all, my work that speaks through the image and the visual in a very direct way. People approach my work in a very direct way when they receive that explosion of color, that explosion of energy from childhood elements, from theatricality.
But nevertheless, I often joke there with the question of historical heritages, most of them abandoned in a country that does not value culture, a country that shows no appreciation for heritage. It is a way of bringing our history and showing it to people. Many people know theaters around the world, but they do not know a great Brazilian theater such as, for example, the Manaus theater, which has a very great historical force and which marks a very important period in Brazil.
My work has many layers, which is to go against an idea of ​​progress, of rationality, of function. This idea that the adult has to produce, has to do, work, and that only the child can dream, only the child can feel the true gift.
So, basically, the layers are far beyond the question of appearance that arises from an image that has a relationship of composition, of symmetry, of beauty, of accumulation of colors, which is very pleasing to the eye.
But when one begins to see that these spaces do not have people, they are empty and they are patrimonial spaces, spaces that are always seen as abandoned, the whole question of creating a friction relationship there with some ideals, and mainly understanding the spaces and the look at them. All of this is very important to me.

Why are the spaces in your photos characterized by the absence of human figures?
At this time it is very important that architecture and objects are the main protagonists. As I have said many times, they are spaces that are obsolete, abandoned, spaces of our culture, of our heritage that, unfortunately in Brazil, do not receive the value they should.
The human figure initially appeared in my work for about three years in a row, when I was taking self-portraits, and they would appear a lot in the photos of the series "In company of objects" and in the series "House party".
I also did a job that was a self-portrait with my father and I have had some works where the character was either hidden behind the balloons or he was a clearly given self-portrait, mine, of the artist. At that time and in those main series that I have done today, I feel that it was very natural that the exit of the character and the entry of a new character who at the moment is a great protagonist who are those elements of childhood: carousel horses, the balloons, the soap bubbles.
All these elements take the place of a figure that is not a human figure, but is a great figure that is there to speak to us, to make us think about how people deal with those objects that most of the time have a very long duration. short.
The soap bubble is only an instant to happen and disappear. The balloon lasts a short time, 8 hours and it withers. To think a little about loneliness, about the displacement of those spaces, which are spaces made to last.
I try to create a theatricality for them through an object that is the opposite of these architectures, it was not made to last, it is an object that ends, just as the party ends, just as everyone's life ends. So, my work is a reflection on the finiteness of the human figure and on the finiteness of things, through these elements such as carousel horses, balloons and soap bubbles.

Is there something in your work that refers to our current situation as a society?
In my work there are many current references that make the viewer, in the first moment, be attracted by the visual, and in a second moment he can also reflect on those heritage spaces, on our society, on our culture, on what It was made from our estates. If the viewer has already entered that place and he is tempted to see that, he may think how much of his history is there, of the history of his own country.

Where will your next exhibition be?
The current exhibition at Zipper Galería is on the bill. It is called "Baroque churches and wooden horses" and it brings a parallel between the visual forms of the Baroque and a relationship with the forms and movements of the old amusement parks.
Alluding to a text by a theorist named Roger Bastide. This theorist was introduced to me by the curator Ícaro Ferraz Junior, who accompanied me for a year through contacts and dialogues about my work.
This exhibition talks about the moment when I finished my doctorate at Unicamp in Plastic Arts. This exhibition shows seven works made through staged photography, which is the genre of photography that I use the most.
In the next exhibition, in February, I am going to do an installation, I still cannot say exactly where it will be. It will be an installation with glass globes, which is an element that I am now beginning to investigate further.
Soon I will participate in the Metropolis program of TV Cultura. Next year the project is to go abroad. Some European theaters have already invited me to do the European cataloging with balloons. I think that the question of installation takes up more and more space in my work, it leaves photography. There are many good things to do next year.