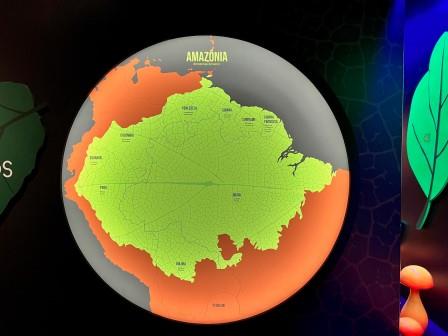 Over seven areas, the temporary exhibition Fruturos-Tempos Amazônicos represents greatness, biodiversity and knowledge present in the largest tropical biome in the world. The exhibition proposes new discoveries about the relationship between the forest and climate and evidence or urgent nature of its conservation.

Present in eight countries and a territory, occupying almost all of Brazil, the Amazon currently shelters more than 30 thousand people, thousands of plant species and one of the most bio-diverse regions of the globe. To reflect this magnitude, Fruturos - Tempos Amazônicos is the exhibition with the largest number of artifacts in the history of the Museu do Amanhã. In addition to being built from the reuse of pieces from other shows that have passed through cultural equipment, the show also presents objects made from the work of indigenous crafts from different regions of the country.

"The exhibition traces an updated perspective on the Amazon biome, which is gigantic, encompasses various countries and, in addition to its enormous biodiversity, is also socially diverse. We intend to show the current challenges of the Amazon, the different scenarios that are configured from model of current socioeconomic development and a proposal for a new model that is based on science, on traditional knowledge and not compromised with the forest in the forest”, explains Leonardo Menezes, Director of Knowledge and Creation of the Museu do Amanhã and curator of the show.

"Fruturos saw the exhibition at the best time, because it goes beyond the forest and its rich biodiversity, it also lacks the cultural diversity of those who inhabit it, its people. Vale knows the region. He has been there for 30 years, helping protect an area of ​​800 hectares of forest, or Carajás Mosaic, equivalent to five times the city of São Paulo," says Maria Luiza Paiva, vice-president-executive of Vale Sustainability.

“It is with immense pride that the Vale Cultural Institute joins this journey over time, us 'Fruturos Amazônicos', which brings us closer to the experiences of millennia, centuries and decades in the world's largest tropical forest. The exhibition invites us to reflect on the various ways of living, coexisting and raising in the region, and to rethink the influences of these cultures on our lives. We join this journey, hoping for Vale's trajectory of more than three decades for the preservation of the Amazon and for the multiple artistic and cultural manifestations that the Vale Cultural Institute supports in the region; and let's move forward, together, looking at how long we have to face”, says Luiz Eduardo Osorio, executive vice-president of Vale Institutional Relations and Communication and president of the Council of the Vale Cultural Institute.

The visitor can feel part of the forest from the setting, which traces interactive activities, elements that reveal the diversity of the Amazon and the sound atmosphere of the region. Driven by a temporal narrative, the show connects with the experiences of millennia, centuries and decades that have cohabited Amazonia throughout, in addition to highlighting future prospects. The sections will address topics such as fauna, flora, people and culture, offering information about the daily life of local populations, the perpetuated traditions and the multiple languages ​​used.
“What led to the work of scientific support for the exhibition, in the first place, is the fascinating universe of the Amazon, which is one of the two richest ecosystems on the planet and, at the same time, one of the two most threatened. Além disso, it is also important to bring the topics of the biome to a wide public in a beautiful, playful and simplified way so that any person can understand. All these aspects are relevant and strategic for the Brazilian society as a whole”, says the scientist Paulo Artaxo, consultant-chef of the exhibition.

The exhibition highlights even more about the unrestrained transformations that we have seen trampling environmental laws for two years. The economic development in recent decades has brought problems such as disorderly urbanization, as well as illegal activities of mining and fraud. In dealing with these questions, the show intends to stimulate the public to reflect on the ways of engaging a development model that preserves the forest in its entirety, mainly through the union between science and traditional knowledge.