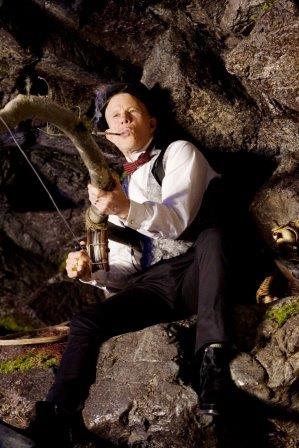 Series: occult symbology in the cinema
The Imaginary of Doctor Parnassus

With its traveling theater troupe, The Imaginarium of Doctor Parnassus offers the public the unique opportunity to enter a universe of imagination and wonder, passing through a magical looking glass. But Doctor Parnassus hides a terrible secret, a thousand years before he had bet with the devil, Lord Nick, and won immortality.
In this kind of Faustian satire, the mirror is a central element. It is found in the opening titles, in the traveling theater set design, and in one of the ending sequences, in which Valentina runs while a broken mirror reflects her fragmented image of her.
The mirror "sometimes appears, in myths, as a door through which the soul can dissociate itself and 'pass' to the other side, a theme that is recovered by Lewis Carroll in Alice."(1) "It is a symbol of the imagination -or of consciousness- as capable of reproducing the reflections of the visible world in its formal reality."(2)

In the XNUMXth century, during the Baroque period, the figure of the mirror recurrently appeared in plays and paintings, since there was the idea of ​​the world as a theatrical stage or as a dream in which we all played a role.

The cinema itself is a mirror where the public sees itself reflected, and in general the arts such as painting, theater or literature play a similar role, that of reflecting the human soul. The hidden side "behind the mirror" is not simple and unambiguous. Like the soul of people, it has multiple facets, very different from the face that is shown socially. This is the reason why the character of Tony is played by four actors. (3)

These hidden faces are precisely what most refuse to see these days, thus leaving the conscience buried in a mountain of rubbish, like those seen behind the mirror when the drunk enters his own imaginary. (4)

Dr. Parnassus's theater is the mirror that Terry Gilliam installs, in the middle of XNUMXst century London, to reflect the imaginary of modern society. That ancient stage that imitates the wagons in which itinerant theaters were mobilized in the English Baroque era, is completely out of tune with the environment, is already out of fashion and does not have an audience to arouse interest.

That bet between Parnassus and the Devil, in which the power of the imagination is put on the table against the immediate and easy satisfaction of basic needs, is a fight that lasts a thousand years and, under the deeply disenchanted gaze of Terry Gilliam, it is the Devil who has the upper hand. Mr. Nick himself, a demon charmer dressed in the style of the 30s Chicago mob, once a center of vice and corruption, admits to not being "well versed in black magic." Ironic phrase that aims to make it clear that, although the film talks about esoteric issues, it does not belong to the horror genre, since Evil is something very tangible that exists here and now, in our consumer society, inviting us to escape through alcohol, drugs, sex and shopping addiction in a mall.

Hence the presence of one of the many winks to the viewer: one of the souls won by Mr. Nick carries a Prada bag in his hands. The reference to “The Devil Wears Prada” (USA, 2006), a film directed by David Frankel and based on a book by Lauren Weisberger, seems obvious. There, the superficiality of the world of fashion in the United States and the mask that it is necessary to wear to belong and be accepted in that paradigm of consumer society are portrayed in a comedic tone.

The graphic media, some of which appear on the screen or are named after one of the characters, appear promoting the imaginary of modern man and the banality of consumer society, the rapid ascent at any price to achieve only economic objectives, even through lies and crime. Hence the sequence of Tony frantically climbing a long staircase, printouts from publications like USA Today and Fortune falling on his head, only to stumble onto a litter-strewn lot.

Or the image of a headline in The Sun publicizing organ trafficking as a real source of financing for a charity. In his own language, Terry Guilliam is telling us that the media is the garbage that we consume daily, while living the false illusion of climbing the social ladder. But the groups that are really millionaires and run the world are made up of mafias entrenched in power, specialists in laundering all kinds of criminal activity.

Instead of this easy way, Parnassus proposes to climb the difficult peak of knowledge through imagination. He proposes "to tell the eternal story without which the world would cease to exist". This story transmitted by word of mouth, this proto-literature, is transformed throughout the film into artistic expression in all its forms and manifestations.

The struggle of art against mass culture continues and a winner has not yet been declared. However, the imagination seems to be losing the battle, since Parnassus appears increasingly aged and spoiled, on the margins of society, while his daughter has been devoured by the great Moloch in the form of a Shopping Mall.

His traveling theater, so extemporaneous, yet still full of life, is transformed towards the denouement into an insignificant puppet show, while Mr. Nick, always young and smiling, distributes apples - a symbol of the temptation of Evil for Christianity and in the story "Snow White", the poisoned fruit that plunges the princess into an eternal sleep- to a group of nuns who happen to pass by the place. The Devil wins the battle against theistic religions.

Dr. Parnassus, Gilliam's alter ego, is a defeated Quixote in a continuous fight against the windmills. It reflects the increasing difficulty of the art of winning the battle in a world whose only goal is to profit financially, consume doubtfully necessary products, and achieve immediate gratification at any cost. A modern world where frivolity and superficiality reign, and where very few are interested in going through the mirror that leads them to meet themselves face to face.

(1) Cirlot, Juan Eduardo. Dictionary of symbols. Siruela Editions, Madrid, 2008. Page 201
(2) Idem, p. 200
(3) In the media there has been talk of the death during the filming of the main actor Heath Ledger and his forced
replacement by stars Johnny Depp, Colin Farrell and Jude Law. However, the need to replace a
actor does not fully explain an aesthetic choice.
(4) In the film, waste also represents the grotesque face of the consumer society.